Animals are smart.  With enough patience and skill, almost any creature can be taught to perform almost any trick.  However, for this list, I chose animals who appear to be acting of their own free will.  That makes it more funny and fascinating, don’t you think? 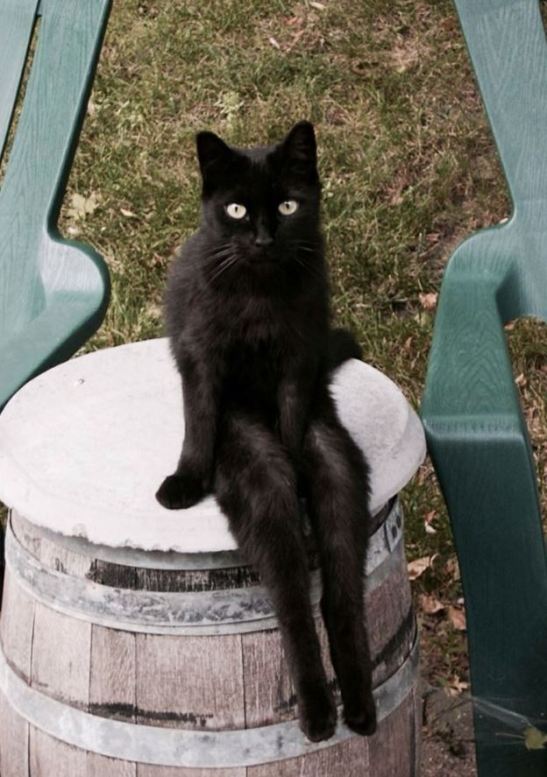 My own cat, Queen Autumn the 1st, sits like this sometimes.  It’s usually when she’s — er — licking her privates…

This video is quite the powerful testimony to how docile horses are.  Equines are gentle giants.  They are usually perfectly willing to let someone else be the boss — even a tiny dog.

This troublemaker is a beautiful Friesian named Mariska.  She lives on a farm in Midland, Michigan, owned by the pitiable Bonems.  Opening your own stall door?  Pshaw!  That’s for amateurs!  Mariska, better know as the Houdini Horse, isn’t content with such trifles.  Once out of her own stall or pasture, Mariska then proceeds to free the entire stable.  It’s a jailbreak!

And invariably, it always ends in a hunt for food.  Mariska’s owners used to store grain in an old freezer.  Not anymore!  Mariska figured out how to shove the freezer open with her nose.  Next, the humans moved the grain to an empty stall, which, of course, posed no problem for Mariska.  Silly humans, they never learn!  Last we heard, the humans were trying a new system of pins, and that was holding.  For now…

5. Sheep Jumping on Bales of Hay.

Animals love hay bales.  I’ve seen dogs and baby goats jumping from bale to bale.  I’ve seen a horse pawing at a bale and yanking it around with his teeth.  I’ve watched as a bear wrestled one across the ice.  I’ve seen cows rolling hay bales along the field, and then unraveling the human’s hard work!  You would not believe the things I’ve seen!

So it turns out that pigs and humans have a lot in common.  Both like swimming in the tropics.  Both have ears.  Both have legs.  We’re practically identical!

This video was filmed by Peruvian DJ Jose Correa.  He was about to shower himself when he saw the little guy in the corner.  Amazed, Jose filmed the rat for a bit, then the rat ran off.  When people started expressing concern for the rat, Jose declared: “I care a lot about animals….  I would never want to hurt him. So I just filmed him and let him go.”

Some people claim that this video was staged.  Maybe it was, maybe it wasn’t, I don’t know.  All I know for sure is: “Reepicheep!  You came back!”

And there you have it — 10 animals behaving like people.  Did any of these surprise you?  Which one was your favorite?  More importantly, have you noticed any animal act like a human in real life?  Leave your weird and wacky stories in the comments below!

So until next time: stay fuzzy, my friends!